Skip to navigation Skip to content Skip to Footer
Contents 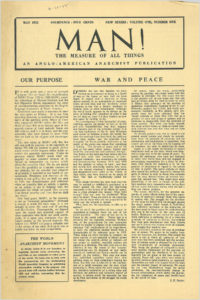 What follows is a transcription of a pamphlet probably written by S.E. Parker, and published by the MAN! Group.

MAN! Journal, published by that group, was a revival of a journal by the same name, and S.E. Parker edited the first three issues. The first issue was published in 1955, the same year as a United Kingdom general election. If Sid did not write the text, then he certainly was responsible for publishing it, and using it to promote the new publication. We feel strongly that this was written by Parker, and will host it here with caveat until proven otherwise.

In a 1993 interview, Sid gave some background on the Journal and his involvement:

“What it was was an attempt to revive an American publication which had existed in the 1930’s edited by a man called Marcus Graham, whose real name was Shah Marcus. He was somebody who still had a deportation order over his head from the 1930’s but they couldn’t deport him because he refused to tell them which country he was born in, so they didn’t know where to send him. He got very paranoid as a result of this thing hanging over his head and wouldn’t come out into the open; but I had written to him and he asked me if I could revive the paper over here, which I did, and edited three issues. It came out every month. When I got involved with pacifism I decided that Marcus Graham’s brand of apocalyptic “up the masses” anarchism wasn’t compatible with what I was talking about and I handed it over to Arthur Uloth who edited a further three issues. There were other people involved in this, a group of people including Leah Feldman and Jim Peake.” 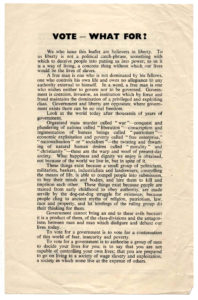 We who issue this leaflet are believers in liberty. To us liberty is not a political catch-phrase, something with which to deceive people into putting us into power; to us it is a way of living, a concrete thing without which our lives would be the lives of slaves.
A free man is one who is not dominated by his fellows, one who controls his own life and owes no allegiance to any authority external to himself. In a word, a free man is one who wishes neither to govern nor to be governed. Government is coercion, invasion, an institution which by force and fraud maintains the domination of a privileged and exploiting class. Government and liberty are opposites; where government exists there can be no real freedom.
Look at the world today after thousands of years of government.
Organised mass murder called “war”—conquest and plundering of nations called “liberation”—conscription and regimentation of human beings called “patriotism”economic exploitation and poverty called “free enterprise,” “nationalisation” or “socialism”—the twisting and thwarting of natural human desires called “morality” and “christianity”—these are the warp and woof of present-day society. What happiness and dignity we. enjoy is obtained, not because of the world we live in, but in spite of it.
These things exist because a small group of politicians, militarists, bankers, industrialists and landowners, controlling the means of life, is able to compel people into submission, to buy their minds and bodies, and hire them to kill and imprison each other. These things exist because people are trained from early childhood to obey authority, are made servile by the dog-eat-dog struggle for existence; because people cling to ancient myths of religion, patriotism, law, race and property, and let hirelings of the ruling group do their thinking for them.
Government cannot bring an end to these evils because it is a product of them, of the class-divisions and the antagonisms between man and man which disfigure and debase our lives today.
To vote for a government is to vote for a continuation of this world of fear, insecurity and poverty.
To vote for a government is to authorise a group of men to decide your lives for you; is to say that you are not capable of controlling your own lives; that you are prepared to go on living in a society of wage slavery and exploitation, a society in which some live at the expense of others.
To vote for a government is to sanction your subjection to the tyranny of authority. By voting you strangle your will and initiative in the noose of politics. No government, be it conservative, liberal, labour or communist, can make man free. All, that government can do is to keep the people in subjection to the evils of power and privilege.
To vote for a government is not to have a voice in the running of your affairs, it is merely to have a voice in choosing your masters, to become a slave to men in power.

Therefore :—
REFUSE TO VOTE !
Instead :—

Join with us as workers, as consumers, as victims of war, conscription and race hatred; above all, as HUMAN BEINGS, in order to create a world of free men and, women; a world in which the domination and exploitation of man by man has been ended, and injustice and wrong have no soil in which to grow, since their causes, the institutions of property and government, have been abolished.
Without property in the means of production, all individuals would be economically equal. This means production for use instead of profit, and free access for all to the means of life.
Without government all would he free; that is each individual would have complete sovereignty over himself, and would be able to co-operate freely with others for the satisfaction of common needs.
Without the coercion of law, without the authority of man over man, each individual would be able to develope his life in a complete and creative manner, his liberty to do so being guaranteed by the liberty of all.
We who issue this pamphlet are anarchists, believers in liberty. We say to you Refuse to give your power to politicians, assert your own will and learn that only by your own direct action can liberty and justice be realised amongst men.